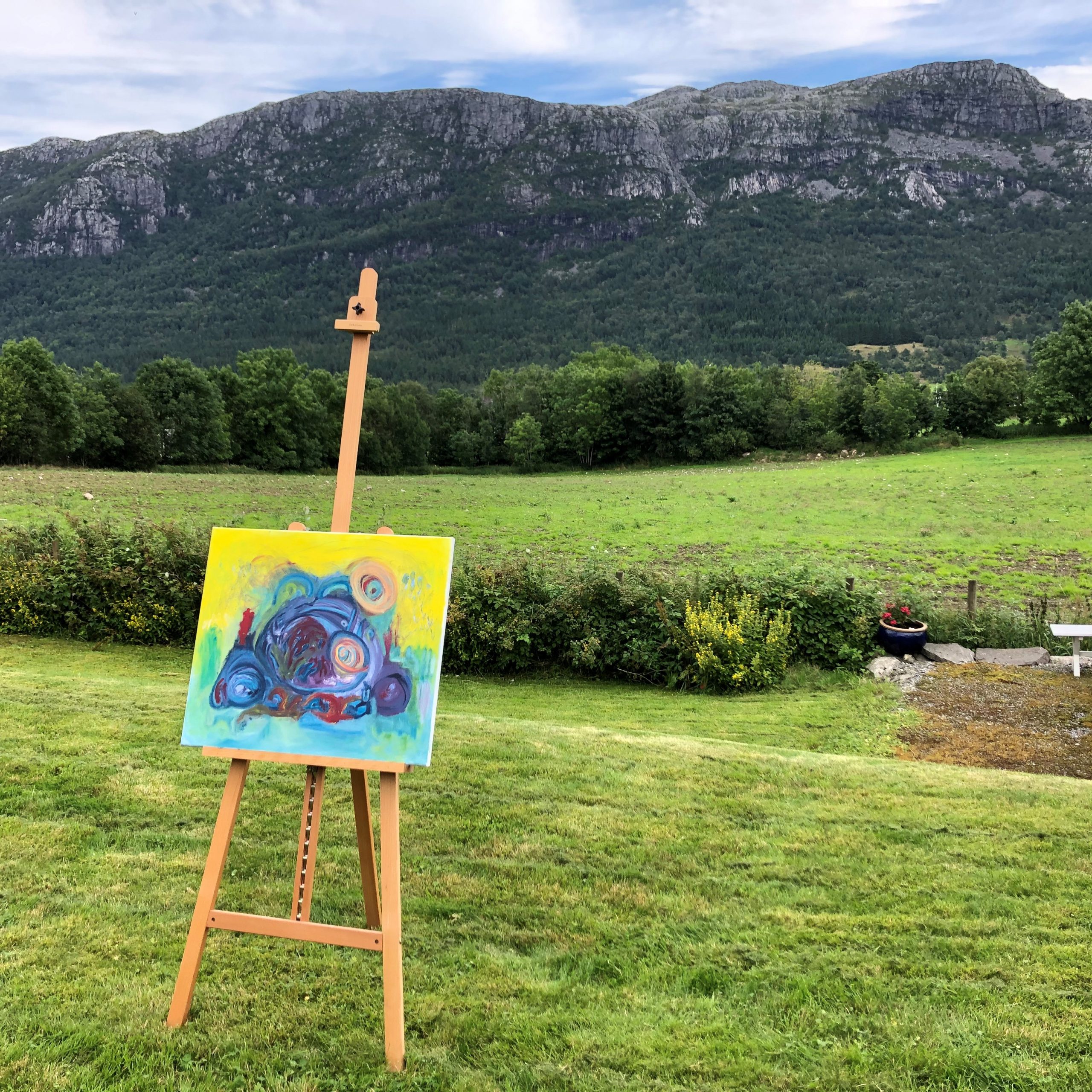 A figuration that recalls Munch and Chagall

We could place the works of Kari Veastad within the movement that is known by all as impressionism. Reality is enhanced by her. And this enhancement of feeling and representing the world characterizes every one of her works.

For refinement of sign, Kari’s works are strongly influenced by Munch, whose best known work is certainly the “cry”; that twisted face that deforms the world with an explosive sound confirms the position of man without God: an immense suffering that becomes a cry of defeat in the presence of nothing, of the nothing that envelops, that twists the forms, that compresses the psyche of man, transforming his face, compressing the skull until it is dramatically highlighted on the skin.

Munch tries to place his hands between nothing and himself, as if the immense silence of a stepmother nature penetrated unbearably into his ears. I must say, with absolute certainty, that Veastad, compared to Munch, is even better able to testify to her feelings on canvas, through representations that fall within the realm of reality.

“We all have something we run away from in life and only we know this. Have you ever tried to escape from your negative emotions … then they come again and again often and they have something they want to tell us and they disappear only when we accept that they are there as part of us …. then suddenly they are gone ”.

These are the reflections that the artist gives in analyzing one of her works. Silence, reflection deepening. These are the words to be able to understand the pictorial thought of Kari Veastad. A thought that in many cases comes close to Marc Chagall’s painting. Her poetic world feeds on infantile fantasy and the transfiguring power of Russian fairy tales. The simplicity of the forms connects it to the primitivism of Russian painting of the early twentieth century.

Her paintings have nothing of the scientific nature of the surrealist survey of the dream, despite the fact that they fit into a dream dimension. Veastad is certainly an artist who brings us closer to the dimension of dreams than any other contemporary artist. A figural oneirism that tells stories that each of us would like to hear. Each observation of her generates a wonder that we have forgotten. The gravity-free world allows wonderful creatures to soar in the sky, like angels. There is no gravity, negative thinking, pain that is not celestially compensated in the artist’s paintings. Whoever looks at her visual melodies, it is as if she opens a window on the heavenly paradise, and observes the most beautiful gardens of her.

What most characterizes her painting is the great freedom of thought, through which the artist expresses her thoughts. The secrets of her psyche are thus reproduced on a canvas that turns into a life diary. Veastad is by no means an academic painter. Her works are evidence of how figurative art is not dead yet. Her pictorial narratives have the same strength as the 10 commandments. These are representations of the soul. A soul that after having wandered in the labyrinth of life, represents its new contemporary paradises. Her painting is the painting of reality. Each brushstroke of her is actually an open window to the world. She decides to portray the most beautiful aspects; real terrestrial paradises.

The observer, who sees the artist’s works, abandons himself to them, and lets himself be transported into a world, completely dominated by beauty and peace. Havens in which to abandon reason and start dreaming. Silent atmospheres. Places of the soul. Kingdoms where quiet reigns supreme. The works of Kari Veastad are exactly that. Works whose peculiarity is represented by the brightness of the composition. Kari is an artist who abandons visual shortcuts and devotes himself to enhancing nature, mother of us all. A nature that offers us its most authentic beauties. A nature, which in her works is represented by a recurring view. A view towards the infinite beauties of the world.

The power of color and the great elegance of the form make her a high level painter. The colors that the artist uses are always very soft. Light is a symbol of eternal salvation. A light that dominates the atrocities of a darkness, whose shadows have no reason to exist.

Bright colors explode off the canvas as Master and award-winning artist, Kari Veastad, brings tangible feeling and expression to Newstar. All at once, beauty, movement, and interaction between body, soul, and spirit are present with every stroke. Orange, red, blue, and white burst forth, giving formless shapes life as the impression of a spirit of expression and arms reaching out pull you deep into the painting. Brilliant brushstrokes leave a trail of texture as Veastad brings solidity to the abstract, carving out a path that draws our eyes to friendly eyes and a matronly smile.

Expertly presented with no distinction between inner and outer landscapes. Mystery beckons to us, hiding life and breath within. A motherly countenance is delicately framed by soft orange and carefully placed red lines giving entirely to her face. The eyes gaze down in delicate peace and love, the texture of each intentional paint stroke adding more emotion as Veastad brings us into her painting by giving us something more significant. Master of the abstract, Veastad gives life to the formless as the matronly figure reaches out to a darker shape lying just below her vision.

Veastad’s style straddles between represen-tation and exploration full-color palettes paired with lines giving motion to the motionless. Her use of color to bring emotion and form while expertly blending color into the background to create a dynamic and vivid scene. All this while creating contrasting highlights to redirect our focus to the face that is indeed there to share with us a moment of pure love and peace. Kari Veastad succeeds in conveying a window view into the vibrant and marvelous world that inspired Newstar.